International Campaign for Tibet: 30 years in service of the Tibetan people

International Campaign for Tibet is exceptionally pleased the Dalai Lama has agreed to reserve time in his program for the upcoming visit to the Netherlands for the occasion of ICT’s 30 year anniversary this year.

For 30 years ICT has committed itself to the Tibetan people. Together with our over 100,000 members worldwide, we have achieved a lot over this period with offices in Washington, Amsterdam, Berlin and Brussels.

Founded in 1988 in direct response to China’s bloody suppression of the revolts in Lhasa of the previous year, ICT supports the Tibetan people and the vision of the Dalai Lama for a peaceful solution in Tibet. Our mission is still as relevant today as it was 30 years ago: the promotion of human rights and democratic freedom in Tibet and mobilization of support from the international community for the Tibetan people.

An important part in the work of ICT consists of ensuring Tibetans in Tibet can practice their ancient traditional religion and culture of peace and compassion without fear of punishment or persecution under Chinese occupation.

Despite immense pressure and propaganda from China, ICT has been successful in keeping Tibet on to the agenda of Western governments and in giving the Tibetan people a voice through its public campaigns.

In an exclusive video, the Dalai Lama has expressed his deep appreciation for ICT's 30 years of genuine commitment to the Tibetan people. Watch this exceptional video here: savetibet.nl/videodalailama

On Sunday, September 16, the public lecture will be preceded by a personal conversation between the Dalai Lama and Richard Gere, the well known actor and president of International Campaign for Tibet.

They will exchange ideas on the Dalai Lama’s personal experiences, his vision and his commitment towards Tibet and the Tibetan people, as well as the universal responsibility, he shares with the rest of humanity. In addition, Tsering Jampa, Executive Director of ICT Europe, will look back on ICT’s activities and achievements for Tibet over the past 30 years.

Support the Dalai Lama and the Tibetan people in their nonviolent struggle for freedom and human rights in Tibet. Support ICT 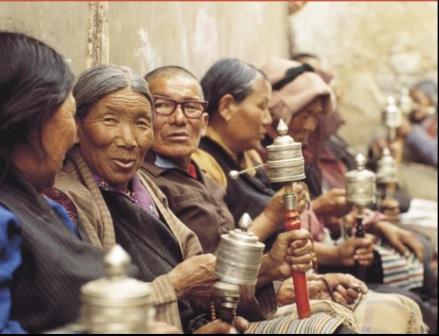